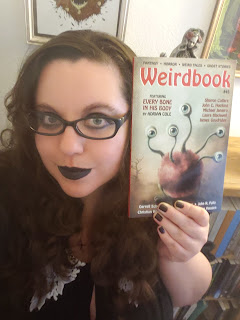 I got my copy of Weirdbook 45 by Wildside Press.  It contains my poem, They Dance in Arsenic. 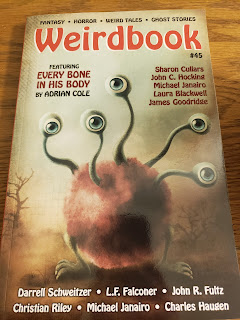 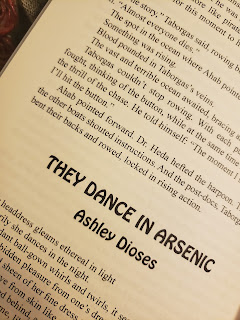 THE DRAGONS OF THE NIGHT, by Darrell Schweitzer
LOVE AND SORCERY, by John R. Fultz
THE RECKONING, by Sharon Cullars
EVERY BONE IN HIS BODY, by Adrian Cole
WE WERE X-MEN, by Abdul-Qaadir Taariq Bakari-Muhammad
SOME BATTLES CANNOT BE WON, by Paul Lubaczewski
NYKTHOS, by Marlane Quade Cook
A WISE AND PATIENT MOTHER, by Laura Blackwell
DRAGON FOOD, by Franklyn Searight
The NIB; AND A BRIEF STUDY IN COSMIC IRRELEVANCE, by Christian Riley
HOUSE OF THE GRAND FLY, by Charles Haugen
THE SMITH AFFAIR, by James Goodridge
THE WAY ORDER IS MAINTAINED, by L.F. Falconer
THE ADJACENT POSSIBLE, by Michael Janairo
THE GOLDEN BOY, by Aditya Deshmukh
WHITE WAKE, by John C. Hocking
Plus a selection of uncanny poetry by Chad Hensley, Frederick J. Mayer, Allan Rozinski, K.A. Opperman, Ashley Dioses, and Dave Truesdale.

Posted by Ashley Dioses at 12:50 AM No comments: 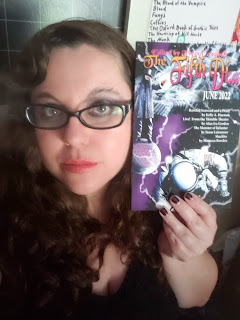 To spice it up a bit, I actually have an article in this issue of The Fifth Di... June 2022 by Hiraeth Publishing, Publishing Your Horror and Fantasy Work.

I started college again spring of last year and wrote this essay for a class.  I felt it was a wasted effort if I didn't attempt to get this published somewhere fitting. 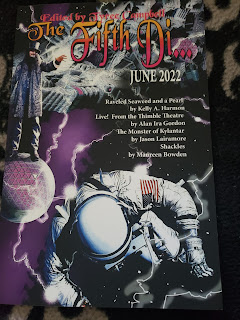 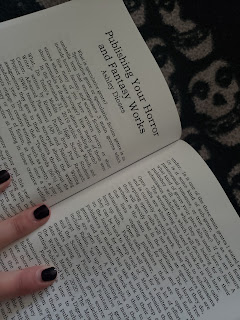 Features
Publishing Your Horror and Fantasy Work by Ashley Dioses
Short Stories
Raveled Seaweed and a Pearl by Kelly A. Harmon
Risen in the East by DJ Tyrer
Shackles by Maureen Bowden
The Monster of Kylantar by Jason Lairamore
Unforeseen Circumstances by Maureen Bowden
The Man Who Was Only History by J. J. Steinfeld
Flash Fiction
Live! From the Thimble Theatre by Alan Ira Gordon
The Strange Case of Mr. Hedford’s House by Jonathan Sherwood
Poetry
Flight of the Beast by Bruce Boston
The Next Incarnation of Joan by Jay Sturner
Queen of Bees by Scott J. Couturier
Azazel-Pomps by Scott J. Couturier
She Talks of the Past, I Think of the Future by C. J. Carter-Stephenson
Welcome to the Future by John Grey

Posted by Ashley Dioses at 9:57 PM No comments: 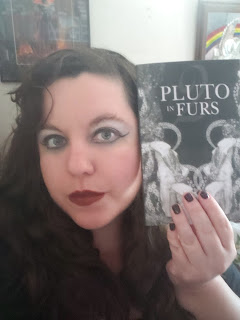 My copy of Pluto in Furs Vol. 2 finally arrived.  I have, I believe three sonnets in here, under the group title, The Countess.  They are a continuation of my vampire sonnet cycle started in Diary of a Sorceress.  The full sonnet cycle will be in Diary of a Vampyress. 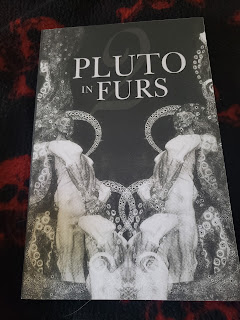 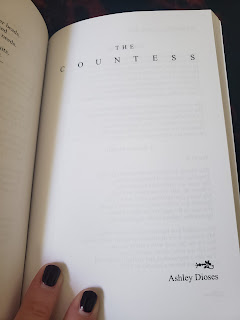 Posted by Ashley Dioses at 9:52 PM No comments:

Among Satyrs and Nymphs: A Devotional Anthology to Hellenic Nature Spirits by Bibliotheca Alexandrina 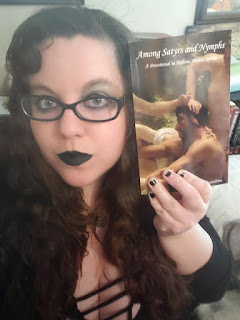 I received my beautiful copy of  Among Satyrs and Nymphs: A Devotional Anthology to Hellenic Nature Spirits by Bibliotheca Alexandrina, which features three reprints of mine, Maenads, Panic, and They Sing in Whispers, all of which can be found in Diary of a Sorceress. 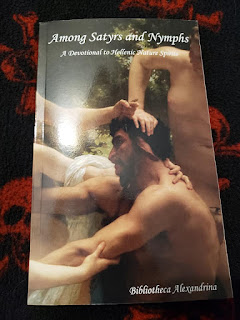 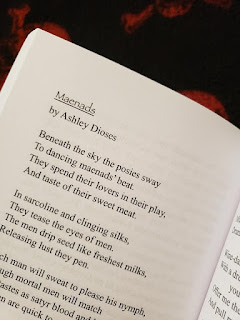 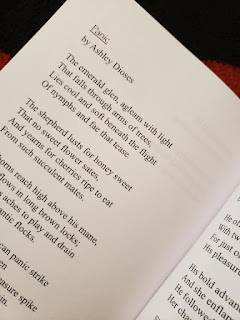 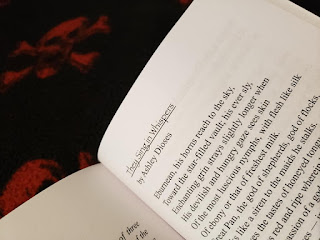 Posted by Ashley Dioses at 9:47 PM No comments:

Kyle and I attended our first L. A. Vintage Paperback Festival since Covid.  It was sad to attend without Dennis Etchison and Bill Nolan there.  I miss them. 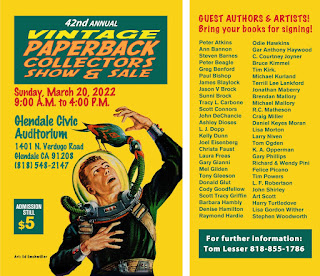 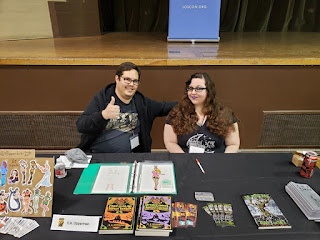 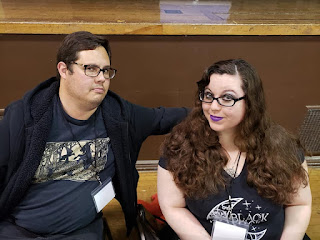 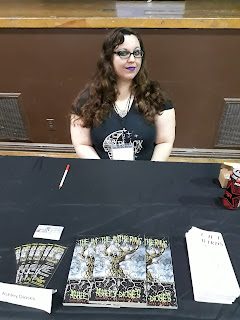 Posted by Ashley Dioses at 9:43 PM No comments:

My poem, Ethereal Melodies, was published in the Yule issue of Eternal Haunted Summer.  You can read it for free, along with the rest of the issue, here.

A Crown of Stars by Shelly Jones

Giving the Moon Back to the Moon by Hayley Stone

The Legionnaire by Mark J. Mitchell

The Mercy of Compromise by Gerri Leen

Owl’s Wisdom by K. A. Opperman

A Sickle Moon by Lorraine Schein

The Tiny Goblin by Ann Wuehler

In the Company of Shadows by Sabrina Balmick

Midnight at the Abbey of Shadows by Laurence Raphael Brothers

Ratri and the Grieving Botanist by Jay Sturner

She Comes With the Mist by Sarah Walker

Singing to the North Wind by Susannah Ravenswing

Posted by Ashley Dioses at 1:25 PM No comments: 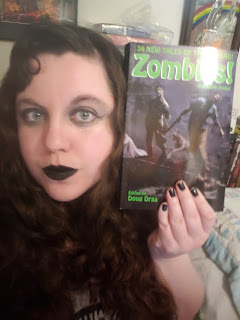 I meant to post this sooner but time got away from me.  My copy of Weirdbook Annual #3: Zombies! by Wildside Press arrived and it looks gorgeous.  It does have an unfortunate typo in my title.  My poem is supposed to be titled Necrophilic Sin, not Necrophalic Sin, which is amusing.  I did not catch the error when verifying the proof so it stuck.  Oh well, it happens. 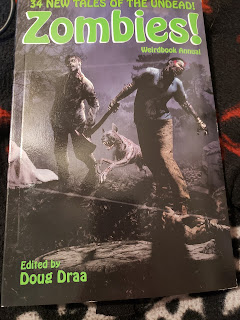 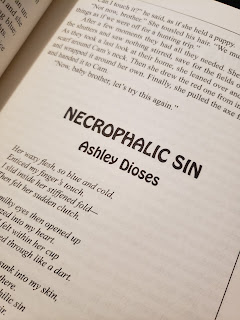 The Meddler, by Matthew John
Tiger Girls vs. the Zombies, by Lucy A. Snyder
Dead Between the Eyes, by Adrian Cole
Alive Again, by Franklyn Searight
The Night Hans Kroeger Came Back, by Kenneth Bykerk
The Marching Dead, by Andrew Darlington
I Wished for Zombies, by D.C. Lozar
O Mary Don’t You Mourn, by Mike Chinn
To Die, To Sleep, No More, by Erica Ruppert
Run, Monster, Run, by Teasha Seitz
Another Night in Bayou Sauvage, by Chad Hensley
Kifaro, by Dilman Dila
But I Love Him, by Scott Wheelock
Who Wants to Live Forever?, by Angela Yuriko Smith
The Dead Are Always Hungry, by Christopher Alex Ray
Zen Zombies, by R. A. Smith
Cassius Max, by KT Morley
A Nanotech Samsara, by J.N. Cameron
Pine in the Soul, by John Linwood Grant
“Welcome Home”, by Craig E. Sawyer
Papa Hanco, by Ed Reyes
They Shall Eat Dust, by Josh Reynolds
In Shadow Valley, by Nick Swain
Devil’s Bargain, by J.F. Le Roux
Right for You Now, by Andrew Jennings
E’Zunguth, the Zombie God, by Maxwell I. Gold
Lazy River, by Kelly Piner
The New Human, by Shayne K. Keen
This Little Piggy, by EV Knight
Life Unworthy of Life, by Stephanie Ellis
More Blood, by Carson Ray
This Creeping Cold, by Kevin Rees
The Body I Used to Be, by Scott Edelman
Queen of Hearts, by S.E. Lindberg
Plus poetry by Ashley Dioses, Avra Margariti, Josh Maybrook, Darrell Schweitzer, Lori R. Lopez, Allan Rozinski, K.A. Opperman, Gregg Chamberlain, Robert Borski, David C. Kopaska-Merkel, Colleen Anderson, and David C. Kopaska-Merkel.

Posted by Ashley Dioses at 12:16 PM No comments:

Ashley Dioses
Ashley Dioses is a writer of dark fiction and poetry from southern California. Her debut collection of dark traditional poetry, Diary of a Sorceress, was released in 2017 from Hippocampus Press. Her poetry has appeared in Weird Fiction Review, Cemetery Dance Publications, Weirdbook, Black Wings VI: New Tales of Lovecraftian Horror, and others. Her poem “Cobwebs,” was mentioned in Ellen Datlow’s recommended Best Horror of the Year Volume Twelve list. She has also appeared in the Horror Writers Association Poetry Showcase 2016 and 2020 for her poems “Ghoul Mistress” and “Her Heart that Flames Would Not Devour” respectively. She was also a nominee for the 2019 Pushcart Prize. She is an Active member in the HWA and a member of the SFPA.