The 10 Best Horror Poetry Collections of 2020

I just discovered that The Withering is listed in the Top 10 Best Horror Poetry Collections of 2020 by Tor Nightfire. This is the first review of The Withering to surface.  I am so honored to be included in this list along with the amazing talents of Marge Simon and Mary Turzillo, Angela Yuriko Smith, Christina Sng, and K. A. Opperman. 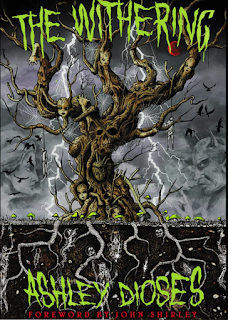 "I love it when a poetry book is both visual and lyrical. Dioses is able to pull off both, making The Withering a sort of picture book of macabre verse. The artwork initially reminded me of Scary Stories to Tell in the Dark—they are that creepy. Normally, rhyming poetry isn’t my thing, but the meter and rhyme of Dioses’ poems turns each one into a spell or devil-song that sticks in your head. These poems are great for the Halloween season and doing a read around of poems over webcam or with the people who reside with you." -Aigner Loren Wilson

If you're itching to read some awesome poetry, check out this list.  If you already have The Withering and have read it, I'd really appreciate it if you dropped a review on Amazon and/or Goodreads.  The Withering is available through Amazon as well as through Jackanapes Press.

Posted by Ashley Dioses at 4:36 PM No comments:

The Withering is Out! 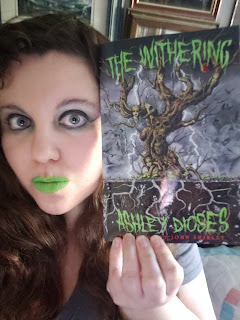 The Withering is now officially out!  You can order your copy directly from Jackanapes Press, where you have different signature options, such as getting it signed by me or signed by me and John Shirley.  Jackanapes Press does have international shipping options.  You can also order it from Amazon and Amazon UK.  It is also now up on Goodreads. 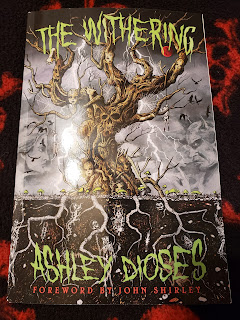 If you preordered it or if you order it in December, you will receive a sampler pamphlet featuring 4 unpublished poems from my upcoming collection, Darkest Days and Haunted Ways. 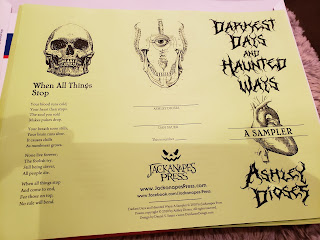 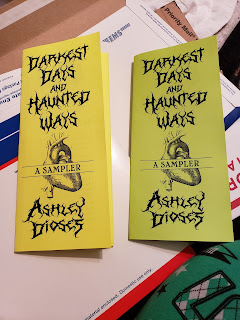 I will have a limited supply of copies you can buy directly from me.  You have the options of getting my signature, a personalization, and/or a kiss in matching Withering green.  You will also receive my Beneath Her Spell: She-Devils of Renown pamphlet which features my 4 femme fatale poems Carathis, Ligeia, Mircalla, and Asenath.  I am just waiting on the pamphlets to arrive. 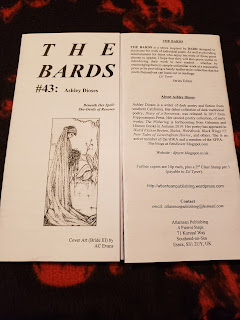 As of today, I have signed and personalized copies where appropriate, and they have been shipped off to John Shirley for him to sign.  If you did not order a signature from John, they have still been shipped together.  From there, they will return to the publisher to be shipped to your individual addresses.  Unfortunately, they will not arrive before Christmas but I hope they will get to you before the end of the year.
If you order a copy, please consider leaving a review on Amazon and/or Goodreads after you've read it.  Even a simple, "I enjoyed it" goes a long way.  I would greatly appreciate it.

Posted by Ashley Dioses at 8:19 PM No comments: 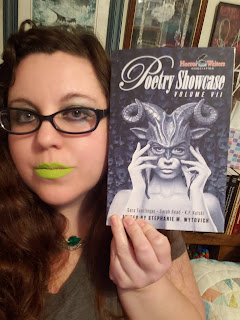 I finally received my contributor's copy of the HWA Poetry Showcase Vol. VII.  My poem, Her Heart that Flames Would Not Devour, appears in this issue. 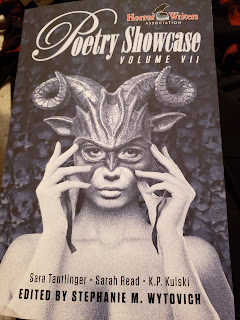 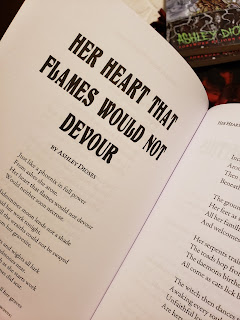 Table of Contents
Introduction by Stephanie M. Wytovich
Notes From the Judges by Gwendolyn Kiste and Carina Bisset
Poems
When First You Wooed Me by Gerri Leen
Are Monsters Born This Way by Jessica Stevens
I Am Emptiness by Chad Stroup
I Am the Corruption by Stephanie Ellis
Caligari by Kelly Robinson
Riding the Exhale by Angela Yuriko Smith
Blood, Brain by Donna Lynch
Monsters Bleed by Naching T. Kassa
Smile by Jordan Shiveley
Shades of Domesticity by Sumiko Saulson
Call the CCC, Your Psychic Repair Team by Donna J. W. Munro
Fairyglass Reflections by Miriam H. Harrison
Shatter by K. P. Kulski
My Grandmother's Mirror by Garrett Boatman
Curtains by Michael Arnzen
Haunted by Christina Sng
The Line by Frank Coffman
The High Woman of Lowland Morgue by David E. Cowen
The Midnight Game by Cynthia Pelayo
Haunted Basin by Roni Rae Stinger
Transubstantiation by Loren Rhoads
Leaving Home by Steve Rasnic Tem
Walking Sam by Owl Goingback
Crossroads Conjure by Kerri-Leigh Grady
Sunset in Hungary by Kendall Krantz
Ghost Walk (Nirgal Vallis, Mars) by Ann K. Schwader
The Witch Who Eats Your Children by Ingrid L. Taylor
Mother Yolk by Sarah Read
Summoning Spell: Persephone at the Gates of Winter by Saba Syed Razvi
They Slumber by Teel James Glenn
The Metallurgist's Dream by Colleen Anderson
Red, Red, Red by Annie Neugebauer
Dementia by Pamela K. Kinney
The Siege by Kyla Lee Ward
It Feels Like Drowning by Terrie Leigh Relf
Dance by Robert Payne Cabeen
Her Heart that Flames Would Not Devour by Ashley Dioses
We Live Through This by Lisa Morton
Brotherhood by Marge Simon
Arachnid by Michael Bailey
La Fille Inconnue de la Monde by Janna Grace
Lullaby for Imminently Murdered Children by Mercedes M. Yardley
Distorted Lies by R. J. Joseph
Leisureville by G. O. Clark
Orange by Alexander P. Garza
Retourne by Lee Murray
The Crows Belonged to Me by Corey Niles
People Trees by Joanna Parypinski
Throat Stars by Sara Tantlinger
The End of the World by John Claude Smith
About the Editor
About the Judges
About the Poets

Posted by Ashley Dioses at 4:39 PM No comments:

The Ghosts of Christmas Present(s) by Shades and Shadows 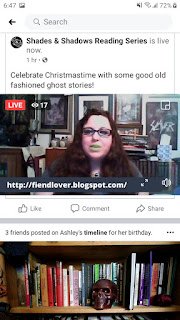 I will be reading from The Withering tonight at 6:55 pm PST on The Ghosts of Christmas Present(s) by Shade and Shadows!  It will be live on Facebook, Youtube, and their website.  Here is the full line-up.  Don't miss out! 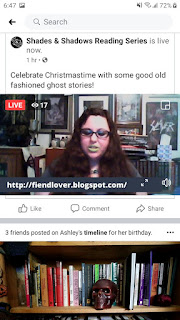 Posted by Ashley Dioses at 1:02 PM No comments:

The Host of Many: Hades and his Retinue by Bibliotheca Alexandrina

The Host of Many: Hades and his Retinue by Bibliotheca Alexandrina is now out and available in ebook form, for now.  The paperback is planned but I'm not sure when that will be out.  My poem, Pluto, appears in this issue. 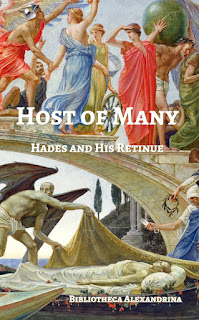 Posted by Ashley Dioses at 9:35 PM No comments:

The Withering is now available for pre-order!  There are a few different fun little purchasing options.  You can get The Withering signed by me, signed by John Shirley, who wrote the introduction, or have it signed by both of us.  We are looking at a possible early December release.  Right in time for the holidays! 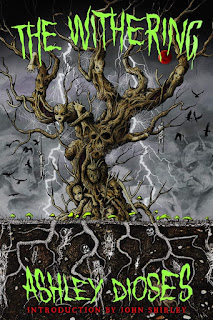 (Cover and interior art by Mutartis Boswell)
Posted by Ashley Dioses at 8:50 PM No comments: 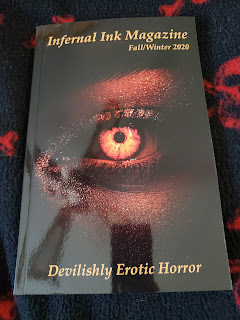 The final issue of Infernal Ink Magazine is now out.  My poetry reprint, Lovely Lucifer, appears in this issue.  I first heard of Hydra M. Star and Infernal Ink Magazine years ago through this ezine called Horrotica.  Horrotica was run by Terry D. Scheerer and was one of the first places I got published.  Terry gave me a lot of feedback and helped me very early on with my poetry and fiction.  He has, unfortunately, left this world and I have dedicated The Withering to him, as a lot of those poems in there he helped me with and published.  So Infernal Ink Magazine was on my radar as a new place to submit but I don't think I actually started to submit there until a few years ago.  I'm sad to see it end but happy to have been in its pages. 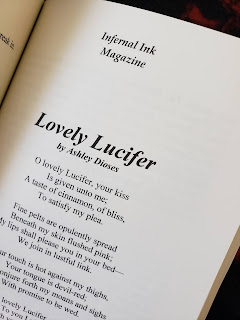 “Notes from the Editor” with Hydra M. Star.

“Ashes To Ashes, Flesh Made Love” by Rohini Mori

“The High Priestess of Tiki, Horror, and Satan” an interview with Peggy Nadramia

“The Little Death” by Diane Callahan

“The Clap of the Gallows” by J.R. Pfeiffer

“Womb Of The Dead 3: The Undead Child Shall Lead Them” by Robert J. Leuthold

“A Love Letter” by Viktor Wolfe

“Trying Something New” by Kurt Dysan

“The Holiday Thing” by Anthony Anderson

“The Mentor” by Hydra M. Star

Posted by Ashley Dioses at 1:48 PM No comments: