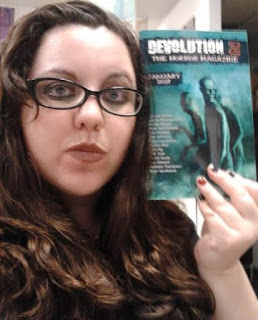 Man, I've been trying to get into Devolution Z for what seems like forever.  They just look so cool!  And finally, I got a poem accepted!  My poem, Nadia, appears in this and is the first sonnet of an ongoing vampire themed mini-sonnet cycle I am writing.  I have never written a sonnet cycle before and thought I'd try my hand at it.  My goal was 10, and then 5.  I originally wrote 4.  The first 4 will appear in Diary of a Sorceress and a 5th one that I wrote recently will go into my next collection.

Posted by Ashley Dioses at 5:54 PM