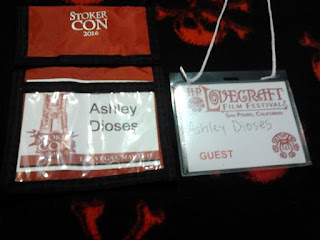 Oh man, where do I even start?!  This was the best con I've ever been to and only the 4th, so I guess that's not saying much.  Kyle and I stayed at the Flamingo the first 2 nights and then stayed at the Royal Resort the last night.  We originally only booked 2 nights because Kyle wasn't sure if he was going to work on Sunday, but once he knew he had it off, we booked another night.  So we were there for the whole run. 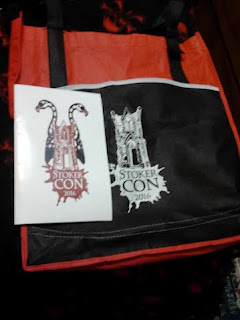 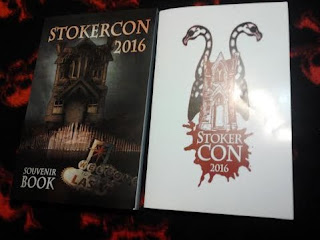 So as we were getting all psyched for the con, I get a message from Vice President of the HWA, John Palisano, on Tuesday asking if I wanted to read a poem at a workshop being held by Ricky Grove.  I thought it sounded cool and I asked when and where and was told it was Friday.  For some reason I was thinking this workshop was like sometime in the future at a different event.  I didn't realize it was for the StokerCon, no wonder he sounded a bit desperate in the message.  ;)  John told me a little about Ricky and said he was an actor and was in Army of Darkness.  Since I am a HUGE fan of Army of Darkness, I looked him up and saw that he played Henry the Red!  HENRY THE RED!  So of course, I told John hell yeah I'll read poetry for Henry the Red!  Then, I looked up the workshop.  I should have looked up the workshop first before I said yes.


Read to Scare: How to Perform Your Work Before a Live Audience with Richard "Ricky" Grove – $25.00 (USD)
Have you ever quaked in fear at the thought of reading your work in public? Or maybe you've found yourself in front of a microphone, stuttering and stumbling your way through a disaster...?In this hands-on workshop, professional actor Richard Grove teaches you the inside tricks on how to conquer stage fright, make yourself heard, and establish a connection with your audience. Richard will talk about everything from knowing how to adjust your mike to modulating your voice. Each participant will have a chance to stand before the class and receive direction and invaluable tips from Richard "Ricky" Grove co-starred as "Henry the Red" in ARMY OF DARKNESS, and has appeared in dozens of other films and television series, including SCANNER COP, BABYLON 5, and THE OUTER LIMITS. He holds a Masters Degree in Acting from Yale, and also does voice work for animated films. He lives in Southern California. 2 hours 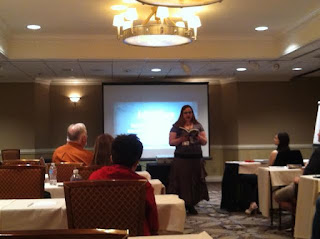 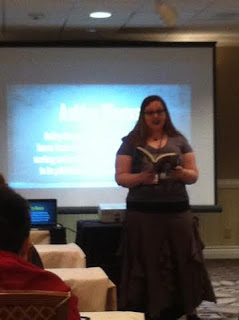 If you know me, you know that I am totally stage fright!  Well excellent, you say, a perfect workshop for you, you say.  Yeah, except when he went over how *not* to read poetry and that's pretty close to how I read poetry and then I had to read it over again the new way and totally butchered it.  And then I had to read it a third time.  Yeah, yeah, wonderful.  Besides my reading, the class was absolutely wonderful!  I learned a lot and Ricky was an excellent teacher.  I am glad I was able to take the workshop.  After the class, I asked Ricky if I could video tape him reading a bit of my poem so I can hear how I should be reading it.  He obliged.  Henry the Red is reading MY poem, oh my God!!!!

He was also kind enough to sign the chapter on Army of Darkness in my copy of If Chins Could Kill: Confessions of a B Movie Actor by Bruce Campbell. 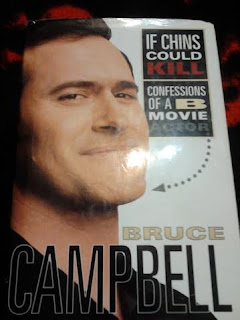 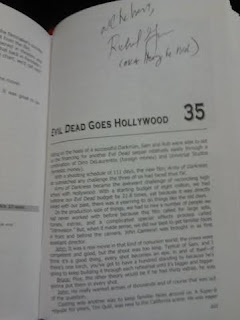 (I know it says Evil Dead but the chapter is about Army of Darkness.)

That was Friday, lets back up to Thursday.  Thursday we meet a lot of cool people for the first time including Nicole Cushing, who recognized Kyle right away and went up him to say hi.  She is the sweetest person in the world and we ended up talking to her and her husband Robert throughout the con.  Congratulations to her for winning the Stoker for her book Mr. Suicide for Best First Novel, by the way!  I got to hold her Stoker and open the little castle door!  Oh my God, I held a Stoker in my hands!!  Life Goal-  Win a gold castle with a little door that opens with your name, winning title, and category. 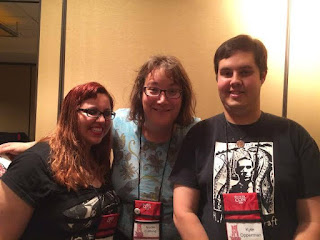 We also spoke with Chris Morey of Dark Regions Press, Michael Bailey also of Dark Regions Press, Roy Robbins of Bad Moon Books, John Claude Smith, Rena Mason, Marge Simon, and many others for the first time in person.  We attended the opening ceremony and I met Patrick Freivald over stacking my plate full of cheese, and we both agreed that we can't trust anyone who doesn't like bleu cheese.  Kyle and I sat with the lovely Nicholas Diak and Michele Brittany and we met a gent named Chad who was very cool to speak with.  After the ceremony, I got my copy of Madhouse signed in the Dealer's Room by various authors.  We then chilled in our room for a bit and then went to Kate Jonez party.  We had a few drinks and spoke with a few friends and a few new people.  It was a blast. 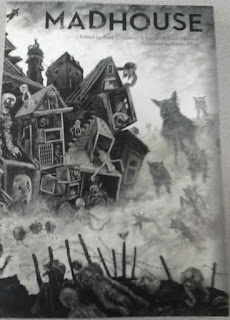 Friday we attended Lisa Morton's Special Presentation- Bump in the Night: A History of Ghosts at 1 pm.  That was absolutely my favorite thing I attended at the con. 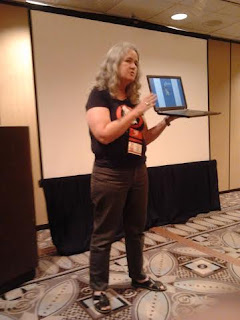 (We didn't have a projector in the beginning.) 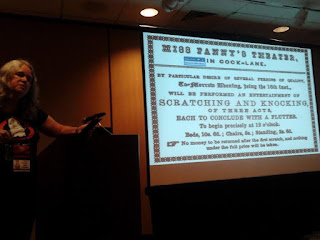 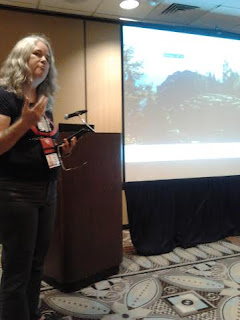 (You can't really tell, but she put images from Skyrim in her lecture, focusing on the Draugr.  That is a picture of a mound they live in.  Skyrim is my favorite video game.)

For dinner, Kyle and I walked to the Rio and ate at the Carnival World and Seafood Buffet.  Kyle's key line of the night was, "Don't get too many vegetables!"  Hey, I like zucchini and squash!  It was a hell of a long walk and we were happy to take a shuttle back, which actually dropped us off at Harrahs.  It was right next to the Flamingo but we had to take some sketchy back alley to find the sidewalk that lead us to the hotel.  It was still a long walk and we died when we got back to our room. 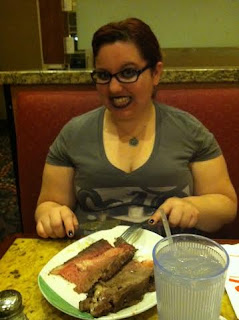 Saturday was hectic because we had to check-out of the Flamingo at 11 but couldn't check-in to the Royal Resort until 3.  And we had to wait for the elevator for half an hour with all our luggage.  Those elevators were ridiculous!  And half of them were shut down for repair.  I've never had to wait in line for an elevator before.  We put all our bags in my car and then headed back to get some food and then head to the Dealer's Room.  We chatted with the Brocks, Bill Nolan, and Dennis Etchison.  I also met Nancy Kilpatrick and Caro Soles who signed my Poe bag.  I also met Ellen Datlow and she signed a few of my books. 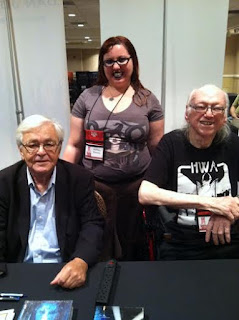 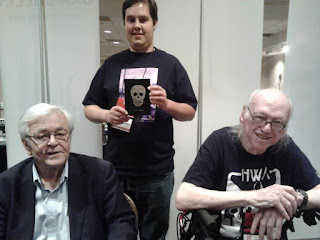 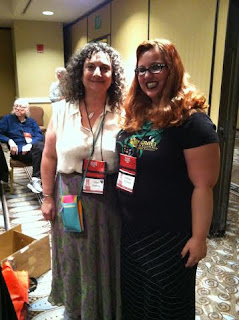 My goodies plundered were Dreams from the Witch House edited by Lynne Jamneck, The Doll Collection edited by Ellen Datlow, California Gothic by Dennis Etchison, and the Mirrors by Nicole Cushing. 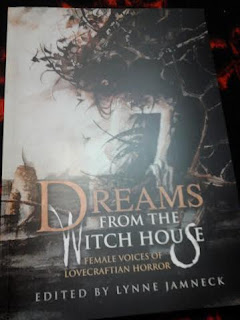 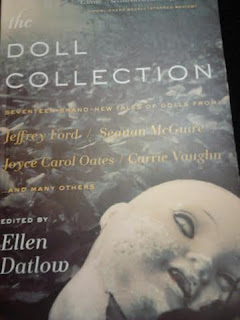 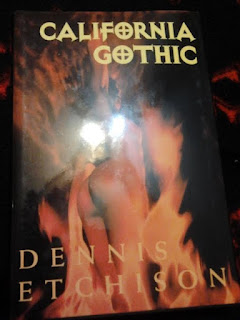 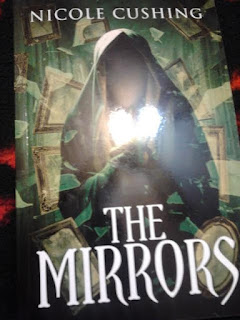 Kyle and I checked into the other hotel which was only 0.9 miles from the Flamingo and was actually a lot nicer than the Flamingo.  Bonus for not having to wait in elevator lines!  We grabbed some cheap grub at a sketchy Carl's Jr. (they didn't even have Monsters, what the hell?!  And they didn't give nor ask if we wanted any ketchup, so had to wait in the drive thru to try to get their attention again).  After we ate, we relaxed at the hotel a bit before attending the awards ceremony.  The ceremony started a bit late.  Jeff Strand was host and was freakin hilarious.  He alone was worth watching the ceremony.  At different points during the ceremony he ended wearing a Jason mask, red nose, and then ripped a certificate with his teeth as he reenacted an event where a dog ripped John Dixon's Stoker finalist certificate.  He also made fun of the hot controversies the HWA has had of late.  Entertaining to say the least.

Congrats to all the Stoker winners! 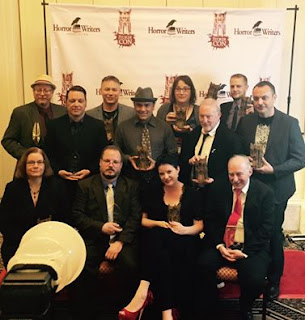 On Sunday, we ate lunch with Sean Hoade at Marilyn's Cafe in a hotel that had Tuscany in the name and I had a delicious lasagna.  He brought some friends and we talked about many crazy things.  After that, Kyle and I headed back home.  We tried to hit Calico on the way but it was closed by the time we go there.  We are now recovering from the long but extremely fun weekend.  What an experience!

P.S. Did I mention R. L. Stein was there!?  I unfortunately didn't get to meet him.

Posted by Ashley Dioses at 5:05 PM