July 28th marked me and Kyle's 5th year anniversary.  We celebrated on the 30th by playing some mini golf in the sweltering heat.  Kyle has been laying at this mini golf course all his life and I rarely ever went mini golfing.  So my swings were as powerful as you'd expect when you give me a stick and something to hit.  More than a few occasions I had to go trailing off the course to retrieve my ball.  We also had fun scavenging for extra balls among the various bushes and decorations.  The 19th hole, which is the last, gives you a chance to win a free game, so the more balls you find, the more chances you have at winning a free game.  Kyle and I both made it into the hole eventually and now have two free games for next time.

After golfing, we chilled inside a bit until my competitive nature urged us to play some arcade games.  We won some candy and a giant deck of playing cards which I gave to Will Hart later that evening. 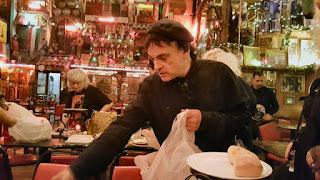 A few Lovecraftians were venturing to L. A. from out of town and out of state, respectively.  Our tradition for our anniversary is to go to Angelo and Vinci's which is a delicious and quite haunted Italian restaurant in downtown Fullerton.  We invited Will Hart and his wife, Jean, S. M. Wright or Starry, and Thomas Broadbent to dine with us if Starry and Thomas happened to come by Fullerton after their trip to L. A. 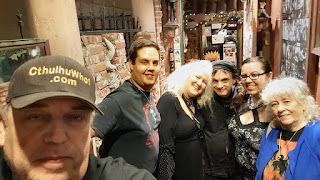 (Will Hart, Kyle, Starry, Thomas, Me, and Jean)

They arrived a tad late but fun was had by all, despite it being short.  Thomas even brought a Weridbook #33 for me and Kyle to sign; that was sweet. 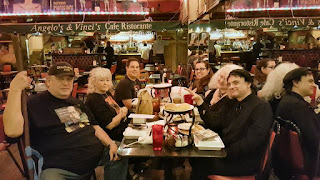 Posted by Ashley Dioses at 2:38 PM