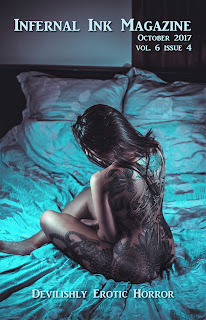 Maenads is one of the 10 poems that have a black and white illustration in Diary of a Sorceress.

Notes From the Editor by Hydra M. Star
Our Bond Complete by Mark A. Mihalko
Howling in the Night by G. Large
Calender Witches and Steel Interview with Paul Sherman
Short Memoir of an Ed Gein Disciple by Steven Allen Porter
Thought's In Bed with Pain by Patrick Winters
Act of the Loathsome Intimacy by Norbert Gora
The Chocolate Box by Holly Flynn
Defrosting by Robert Beveridge
The Predator by Timothy C. Hobbs
There is No Sin by John Siney
Valium by Jessica Williams
A Fetishistic Feast of Indulgence by Rick Powell
Horny by Evelyn Eve
Tormentor by TheByStander
Maenads by Ashley Dioses
The Author Bordello with Alder Strauss