The Bards Issue 43 Beneath Her Spell: She-Devils of Renown by Atlantean Publishing 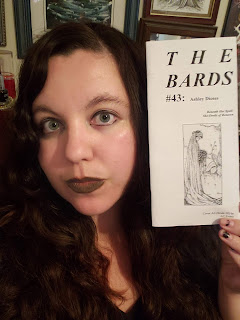 I received my copies of issue 43 of the Bards series, Beneath Her Spell: She-Devils of Renown by Atlantean Publishing.  This is a leaflet (broadside) containing four femme fatale poem reprints including Carathis, Mircalla, Ligeia, and Asenath.  Cover art is 'Bride III' by AC Evans.  You can find Carathis, Mircalla, and Ligeia in Diary of a Sorceress and Asenath in Weirdbook Annual #2: Cthulhu by Wildside Press.  Asenath will also appear in my third poetry collection, Diary of a Vampyress.

Here's a little information about the Bards series.
"The Bards is an irregular series of short poetry 'broadsides', a folded A4 sheet in format, inspired by Bard. It differs from its parent title in that each issue is dedicated to the work of a single author — they are intended to be handed out at poetry readings or for readers to purchase as affordable samplers of a poet's work. It is edited by DJ Tyrer."

I will have copies for sale at the H. P. Lovecraft Film Festival in Portland, Oregan this October. 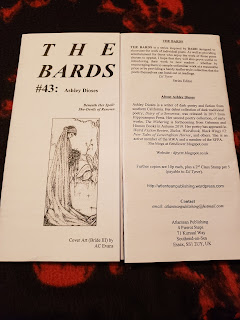