I'm excited to announce that Kyle and I will be vendors at the H.P. Lovecraft Film Festival® and CthulhuCon™ San Pedro 2016! 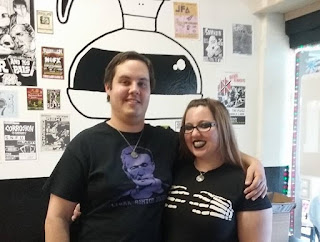 "KA Opperman & Ashley Dioses, two of today's finest Weird poets, will be at the 7th Annual H.P. Lovecraft Film Festival in San Pedro, California, April 29th to May 1st at the Warner Grand Theatre, where they will be reading from, signing, and selling a number of choice titles in which their work appears."

K. A. Opperman is a writer of Weird and horrific formal poetry from southern California, USA. His influences are many, but Clark Ashton Smith and H. P. Lovecraft are at the top of the long and seedy list. Think exotic, erotic, psychotic, and necrotic—often at the same time. His debut verse collection, The Crimson Tome, will appear from the famed Hippocampus Press a little later this year—nearly 200 pages of madness wrought in rhyme. Aside from that, he has appeared in the journal Spectral Realms, will appear in several anthologies from Horrified Press, and will appear in The Weird Fiction Review #6.

Ashley Dioses is a poet of dark fantasy and horror from southern California. She is currently working on her first book of dark traditional poetry to be out from Hippocampus Press, hopefully this year. Her poetry has appeared in Weird Fiction Review, Spectral Realms, Weirdbook Magazine, Omnium Gatherum Media, Eye to the Telescope, Xnoybis, Necronomicum, Gothic Blue Book, and elsewhere. Her poem, “Carathis”, published in Spectral Realms No. 1, is mentioned in Ellen Datlow's full recommended Best Horror of the Year Volume Seven list. She blogs at fiendlover.blogspot.com.

This is totally awesome!  I've never been a vendor before!  I am so excited.  We will also be reading some of our poems on stage, which is frightening but also awesome.  I'm stoked.
Posted by Ashley Dioses at 10:12 PM