I am devastated to learn of the passing of poet extraordinaire, Michael Fantina.  I never met Michael in person but we often emailed and exchanged many poems over the few years I've known him.  When we first started emailing, we would discuss our favorite subjects to write about and he would send 4 or 5 poems at a time containing a certain theme or subject and I would try to match him with poems to send back but I couldn't keep up.  He just seemed to have a neverending stream of poems to share and I could only send one or two back at a time as I'd write them or as my old ones were edited.  I remember asking him one time if his new collection, Alchemy of Dreams and Other Poems, contained his poetry from his Rainfall Records and Books chapbooks (since I don't own those) and he said hardly any.  I just thought that it was incredible he had so many poems and amazing ones at that.  I remember asking him if he ever got writer's block and he told me when he gets writer's block, he writes sonnets.  Sonnets broke through his block.  He also said that he wrote poetry almost constantly (except when he was in the hospital for 2 months 12 years ago) since 1996.  I wish my writer's block could be broken through by the power of sonnets. 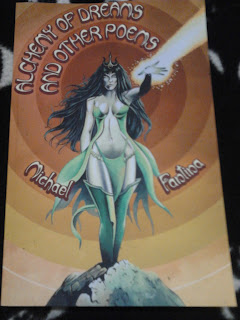 I wrote him to ask if he would honor me with a tribute poem for Diary of a Sorceress and was kind enough to oblige.

Michael's poetry is so rich and beautiful and if you have not read any of it, I urge you to pick up a copy of his collection, Alchemy of Dreams and Other Poems.  It's currently eligible for the Elgin award and it made it to the preliminary round for the Stoker award this year if I recall correctly.

Michael L. Fantina, born March 1, 1946, in Garrett, Indiana.  Died on June 7, 2018 after a brief illness at Morristown Memorial Hospital.  Mike lived most of his life in Bernardsville where he was a standout athlete at St. Elizabeth’s and Bernard’s High.  He attended Bellarmine College in Kentucky and Rutgers University, where he received his BA.  He was a Vietnam era veteran, serving at Fort Meade, MD.  He worked in academia for most of his career, for a time at Florida International University and Seton Hall University and then at Rutgers, Labor Studies program.  In retirement, he worked as the Lead Security Guard at G4S.  Mike was known for his gentle nature and prolific writing.  Through the years, he has had hundreds of poems and stories published, recently his book Alchemy of Dreams and Other Poems was published and next spring a book of his short stories will be released.   An expert on the Civil War and World War II he was an active member of the American Legion.   He was parishioner of Our Lady of Perpetual, and a strong support of many causes, Priests for Life, The Universal Living Rosary Association and other Catholic institutions.   Mike had many hobbies and interests, anyone that knew him or was even a passing acquaintance probably received a wristwatch from him.  He was an avid collector.   Michael will be missed by his brothers, sisters, nephews. 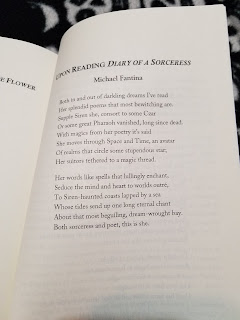 Upon Reading Diary of a Sorceress

Both in and out of darkling dreams I’ve read
Her splendid poems that most bewitching are.
Supple Siren she, consort to some Czar
Or some great Pharaoh vanished, long since dead.
With magics from her poetry it’s said
She moves through Space and Time, an avatar
Of realms that circle some stupendous star;
Her suitors tethered to a magic thread.

Her words like spells that lullingly enchant,
Seduce the mind and heart to worlds outré,
To Siren-haunted coasts lapped by a sea
Whose tides send up one long eternal chant
About that most beguiling, dream-wrought bay.
Both sorceress and poet, this is she.

Rest in peace, Michael, you will be missed.

Posted by Ashley Dioses at 8:41 PM