Yesterday Kyle and I were interviewed for a Clark Ashton Smith documentary by Darin Coelho Spring.  Darin found out about us through our work in Spectral Realms and after finding out where we lived and that we were a couple, he wanted to interview us on CAS and his poetry.  He told us that he was intrigued that we were both young and fans of CAS and wanted to include that aspect in the film. 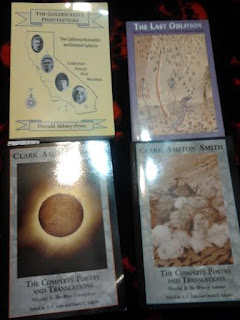 (Touching up on my CAS a few weeks prior to the interview.)


We all met at Kyle's house and then from there, we ate lunch at the Matador in downtown Fullerton, which had the most amazing carnitas by the way, and where he gave me the Shadow of the Unattained: The Letters of George Sterling ad Clark Ashton Smith as a gift.  During lunch, we talked about different topics so Darin could get a feel of what to ask during the interview and what we could touch upon.  He also brought us his copies of Spectral Realms for us to sign. 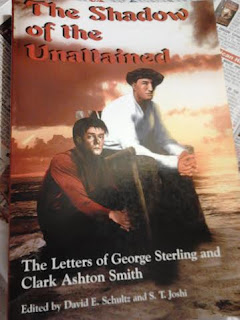 After lunch, we headed to a park where we sat on some autumn-leaf covered stone stairs.  We discussed many fascinating topics.  Let's see if I can remember everything.  We held up Spectral Realms and talked a little about who we are and how we're influenced and/or inspired by CAS and Kyle talked a little bit about his book.  We discussed how Kyle and I's relationship started over poetry and how CAS fit into subject matter and writing and how we share him as a common interest.  I read the Witch with Eyes of Amber and explained why it is my favorite poem and how it's awesome.  I had to read it like 3 times though because I was a tad nervous.  Kyle and I touched upon a few of CAS's stories such as the City of the Singing Flame and the Isle of Torturers.  And I was asked to give my opinion on why women might like reading CAS.  That was a curve ball for me.  I didn't think I'd have to speak for a whole gender. 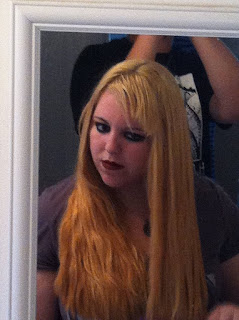 (Gotta look good for the camera!)


This was an extremely fun and hopefully successful interview (we had some wind that might've affected the sound).  Definitely not bad for our first interview!

Darin hopes to get this played at the HPL Film Festival and that would be amazing if that happens.
Posted by Ashley Dioses at 9:37 PM