I just received my copy of the Winter Horror Days anthology edited by David Blake Lucarelli, which has my Yule poem, Winter Witch in it.

"As you sit warm and cozy in your chair by the fire, comforted by the pretty lights and decorations of your holy nights, a chill runs up your spine. Part of you knows that the things that creep in the night and stalk your souls take no holiday. Indeed, as members of the Los Angeles Chapter of the Horror Writer's Association are here to remind you with twenty dark tales and four eerie poems, at this time of the year, many terrors lie just beneath the tinsel. They bring a special kind of fear that can only be found in The Winter Horror Days."

There's also a few prizes to win for the first 5 people who give an honest review of it.

The first 10 readers to post a review to Amazon and/or Goodreads will receive a randomly chosen prize from this exciting prize pool.

4. 1 - trade paperback of your choice from the Omnium Gatherum catalog

6. 1 - signed copy of a mysterious novel to be named at a later date by Sean Patrick Traver 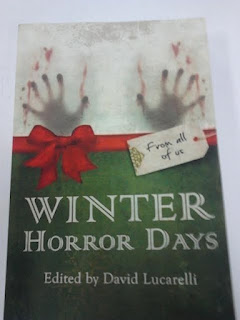 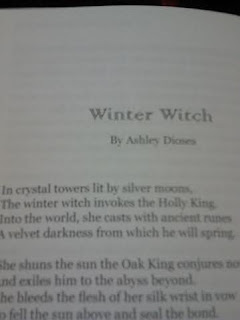 I also received my copy of Sanitarium #39 in the mail as well.  The formatting is a bit strange in this one for poetry.  It has the title of my poem on one page but then has the poem on another which makes it look like it was cut off.  And it's formatted that way.  Strange. 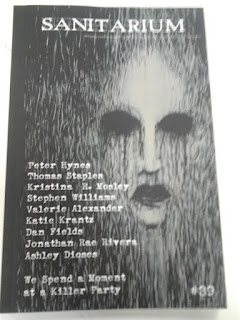 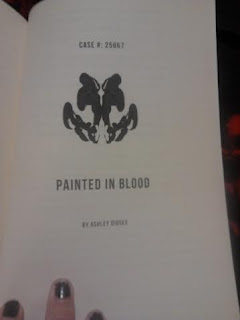 (The title is on one page, which looks cool here, but it makes the next page weird.) 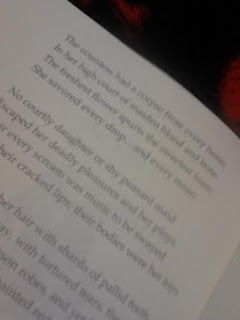 (See, it kind of looks like the poem started on the previous page, but it doesn't.  It starts like that.  I'm thinking they should've centered it to make it look like that's the whole poem, which it's supposed to look like.)

I ordered 4 copies of Gothic Blue Book V: The Cursed Edition by Burial Day Books for a signing Kyle and I plan on holding in February.  We plan on contributing our second cc to the pile to make 6.  More details on the signing to come. 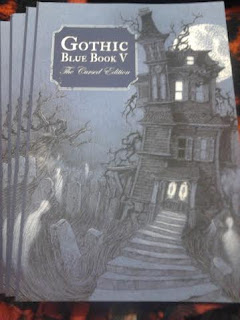 Posted by Ashley Dioses at 9:01 PM