History of the Sorceress 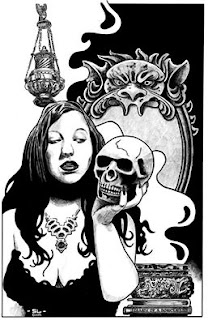 Kyle and I wrote a poem collaboration shortly after we got together.  It was entitled Sorcerously Twined and had three parts.  And that was how the Sorceress and Sorcerer manifested; their names, Ashiel and Xyre, would come later.  Sorcerously Twined, with all three parts, has 5,432 words.  It was originally published in an online zine called Dark River Press, where Kyle was a poetry editor for a time before it closed.

Sorcerously Twined tells of a Sorcerer who is in love with a Sorceress who was not in love back.  The Sorcerer planned to kill himself with a poisoned brew he created using plants from her garden, only to find out that by drinking it, he would be connected to her.  Their fates would be entwined.  If he died, she would as well.

In order to fix this, the Sorceress came up with a plan to summon a demon in hope that the demon would cure them.  At the same time, the Sorcerer recites a love spell.  The demon refuses to help and tells her that only they can fix their mess.  The Sorcerer finds his own spell that could save her but he would still die.  He does this and as he lies dying, she finds him.  His love spell had begun to work slowly and she instead, reverses the spell to die in his place.

Devastated, the Sorcerer searches her tower to find a way to bring her back to life.  He finds her grimoire opened to the page of the demon and he summons him.  The demon requires the Sorcerer’s soul in exchange for allowing him entrance into the Otherworld to find her soul.  Meanwhile, the Sorceress in the Otherworld awaits to be judged and reincarnated into her next life in a temple that she designed from previous lives.  Her life memories grew fuzzy yet a smell of rosehips reminded her of the Sorcerer and the poison he made.  She immediately began to scry for him.

The Sorcerer finds a guide to lead him to the Sorceress yet when they are about to part, the guide’s price is simply to eat a mushroom he procures.  The Sorceress saw this through her scrying mirror and knew this to be a trick.  Eating anything in the Otherworld binds their soul there.  The Sorceress then sent a servant of her own, oblivious to the servant’s own agenda, and the servant stopped the Sorcerer from eating the mushroom in time.

After the Sorceress’s judgement, she found the servant, knowing the servant called the hoard, and interrogated her.  The servant revealed all and the Sorceress raced to Vanth’s temple.  The Sorceress saved the Sorcerer and they raced back to the portal between worlds before it closed.  Unfortunately, only the Sorcerer made it through.  The Sorceress used all her power to push through to the other side yet only as a wraith and she helped defeat the demon. The Sorcerer, however, was fatally wounded and died.  The story leaves off hinting that they may meet in another life.

Diary of a Sorceress belongs to her and shows a few various insights into her life and her thoughts of this Sorcerer.  The Crimson Tome also might have sprung from a few seeds in this poem.  Aspects from this one long collaboration have found their way into both our collections.  This poem was the beginning of the Sorceress and the Sorcerer. 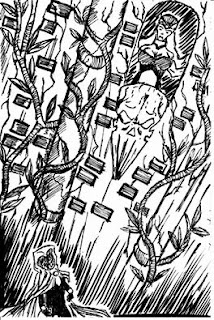 Posted by Ashley Dioses at 9:25 PM