Skelos 3: The Journal of Weird Fiction and Dark Fantasy by Skelos Press

Finally my contributor copies of Skelos 3: The Journal of Weird Fiction and Dark Fantasy by Skelos Press have arrived!  I've been waiting months for these.  My poem, The Prideful Scribe, appears within. 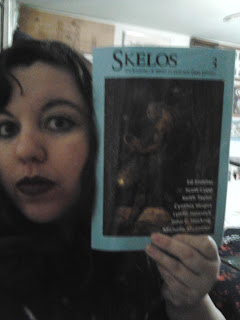 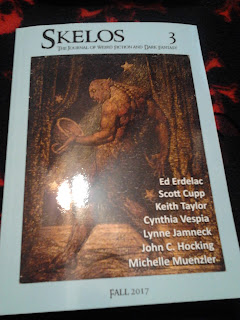 Table of Contents:
Short Fiction:
Ten Thousand Drops of Holy Blood by John R. Fultz
Cats of Dornishett by Michelle Muenzler
Book of Blasphemy by Keith Taylor
The Collection by Rhona Eudaly
The Muttwhelp by Edward M. Erdelac
The Killing by Scott Cupp
Edderkop by Lynne Jamneck
Curse of the Dripping Blade by Christopher Fulbright
Fat Charlie by S. Boyd Taylor
Invitation to Dine by Cynthia Vespia
Last Pale Light in the West by Josh Rountree

Poetry:
The Prideful Scribe by Ashley Dioses
By the Deep-Green Sea by Peter Rawlik
Woman in the Feathered Mask by K.A. Opperman
Destroyers by Wade German
The Last Battle by Aurela Wilder
Rogue by Chad Hensley
Jirel by Pat Calhoun

Essays:
The Boys from Atlantis by Bobby Derie
It Seems to be a Sort of Monster: Misrepresentations of the Cephalopod in the Fiction of Jules Verne and H.P. Lovecraft by Jack Staines

Special Features:
Skull Session - Editorial by Mark Finn
By Crom! by Rachel Kahn
Images of the Southern Gothic - A Photo Gallery by Aimee Reist
An Interview with Lynne Jamneck and S.T. Joshi by Jason V. Brock 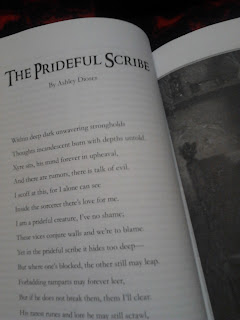 Posted by Ashley Dioses at 6:31 PM