ToC for Darkling’s Beasts and Brews

Darkling’s Beasts and Brews by Lycan Valley Press Publications is an interesting anthology that pairs drink recipes with dark poetry.  When I first heard the open call for this, I knew I had to submit something.  Not only did I submit a poem, but a few drink recipes as well which all have found a home inside these pages.  My poem, The Power of the Moon, appears inside and is the only werewolf poem I have ever written.  This book is, unfortunately, not yet out and currently has no set release date.  So I shall tease you all with the ToC and cover art until there is a link to purchase it.  I am so excited for the collection.

DARKLING'S BEASTS AND BREWS -- POETRY WITH A DRINK ON THE SIDE 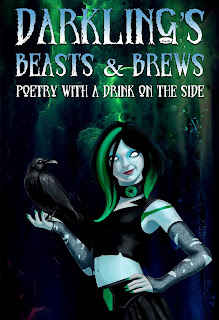 The Monster Mash by John C. Mannone
The Morning Named Apollo: A Chimeric Blood Song by Stephanie Wytovich
The Lycanthrope by Paula Berman
The Hunter by E.M. Eastick
The Eyes by Mark Mihalko
Fated to Die by Sarah Tantlinger
With Bared Teeth by Javier Gómez
In Our Past Mortality by Jay Rohr
Lust in the Full Moon by Khalil Goddard
Frontier Winter by Catherine Bult
Evolution of a Young Lover by Frank Heather
Nosferatu by Michael Hanson
Redcap by Kurt Newton
The Night Whispers by Sarah Cannavo
A Witch Reflects on Loss by Rie Sheridan Rose
Backwards Footprints by Donald Armfield
Secrets of the Loch by Louise Smith
A Siren’s Pursuer by Donald Armfield
Hunger by Candice Robinson
The Novealla of Vuowro (#) by Ron Riekki
Figment Fantastica by Taye Carrol

And They Ride by S.L. Scott
Noppera-bō by Samantha Lienhard
Black Vampire by Lavel Wideman
The War Witch by S.L. Edwards
The Power of the Moon by Ashley Dioses
Fisherman’s Lure by Ken MacGregor
The Beast I Am by Jyothika Aaryan

The Scab That Oozes by Nick Manzolillo
Nightmare Upon Dissolution by Jason Ellis
Night On The Town by Andrew Dunlop
The Faerie Rules by MJ Mars
A Prank Too Far by Anne E. Johnson
Whitechapel Werewolf by Samantha Potts
An Vorvoren a Senar by Darren Lester
Frankenspider by Minerva Cerridwen
The Vampire Ogrencisi by Shalom Aranas
Moon in Purple by Morphine Epiphany
Antlered Avenger by Kimmy Alan
He, The Forest by Jay Outhier
Feetures by Shawn Chang
We Are Legion by Allison Shepherd

Torture of a Pirate by Ethan Nahté
Food Shopping by Anne M. Gibson
Smoketown Zombies by James Quinn
Just Put Out Your Hand by Juleigh Howard-Hobson
Hunger for Life by Andrew Hudson
My Parents Don’t Like Kali ‘Cause She Drives A Mustang by Wolf Boy
Dinner with Jerry by Sally Max
Eventide by K.A. Opperman
Sodium-Vapor by Lisa Treece
When Monsters Share by Shawn Chang
Underneath the Red Moon by Linda M Crate
Siren of the Woods by Qurat Dar
Tommy’s Knocking by Patrick Winters
New Fur for Old Skin by Oliver Smith

Clown Night by L.S Reinholt
Within the Darkness of the Carnivále by Donald Armfield
Posted by Ashley Dioses at 4:41 PM