So I got an awesome message from Douglas Draa, the new editor of the reemerging Weirdbook, asking me if I had another, shorter poem, to fit into issue #31 because there was a little more room.  I was ecstatic and immediately sent something.  Now I can happily say that it was accepted and I will now be in issue #31 and #32!  My poem in this is called Castle Csejthe and it is about the blood countess herself, Erzebet Bathory.  Here is the cover, front and back, and ToC! 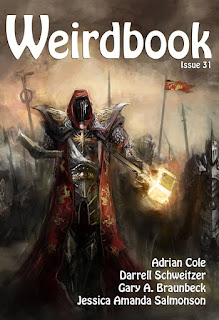 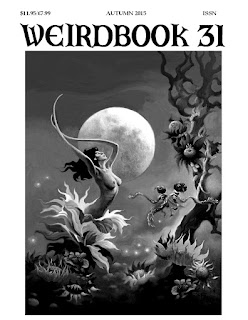 FICTION
Chivaine by John R. Fultz
Give Me the Daggers by Adrian Cole
The Music of Bleak Entrainment by Gary A. Braunbeck
Into the Mountains with Mother Old Growth by Christian Riley
The Grimlorn Under the Mountain by James Aquilone
Dolls by Paul Dale Anderson
Gut Punch by Jason A. Wyckoff
Educational Upgrade by Bret McCormick
Boxes of Dead Children by Darrell Schweitzer
The Forgotten by D.C. Lozar
Coffee with Dad’s Ghost by Jessica Amanda Salmonson
Missed It By That Much by Gregg Chamberlain
A Clockwork Muse by Erica Ruppert
The Rookery by Kurt Newton
Wolf of Hunger, Wolf of Shame by J.T. Glover
Zucchini Season by Janet Harriett
The Jewels That Were Their Eyes by Llanwyre Laish
The Twins by Kevin Strange
Princess or Warrior? by S.W. Lauden

POETRY
The City in the Sands by Ann K. Schwader
NecRomance by Frederick J. Mayer
The Shrine by Wade German
Bride of Death by Dave Reeder
Modern Primitive by Chad Hensley

UPDATE: I’ve been told that some last-minute additions have been made to the ToC for WB#31. These include a sonnet by the great Wilum Pugmire, as well as pieces from Ashley Dioses and Kyle Opperman.